Other Bronze Age artifacts have also been found in Carleton Rode.
This middle Bronze Age spearhead was discovered while digging a vegetable bed in the garden of Hunts Green Cottages, in 1991.
It is of the type known as 'Side Looped' because of the loops on either side of the socket. These enabled the head to be lashed to the shaft of the spear with leather thongs. Such spearheads are not easy to date as most are found as isolated finds. The middle Bronze Age dates from 1550 BC to 1100 BC, these side looped spearheads start about 1400 BC and continue to be made after up until 1100 BC.
​They are cast in a two piece mould, which has a clay plug suspended in it to create the hollow for the socket.

Our field walks & metal detector days have produced some
​interesting finds.
​This sheep's bell along with the token below were found during our 2003 metal detector day in a field adjacent to Carleton Rode School
opposite the church. 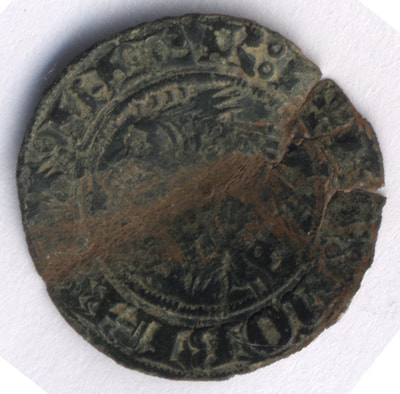 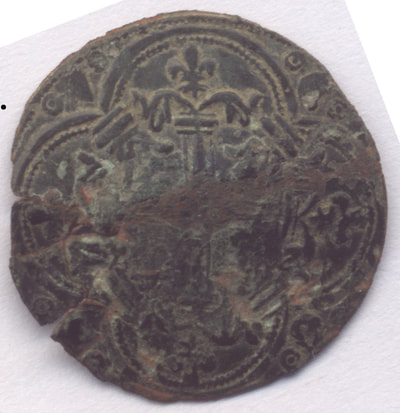 This token is a French 14th century lucky piece. The inhabitants of Toulouse believed that a terrible animal called a 'Malle Beste' or 'Bugbear' roamed the streets at night. An annulet was struck at the Hotel de Ville for the protection of those who wore it.
On one side is a bear is secured to a tree, on which a large flower grows, with similar trees to the left and right; enclosed in a double inner circle, the outer is granulated. The other features a three stranded cross fleur delisee and fleuronnee with a quatrefoil in the centre; enclosed in a tressure of four arches, fleuronnee at each. 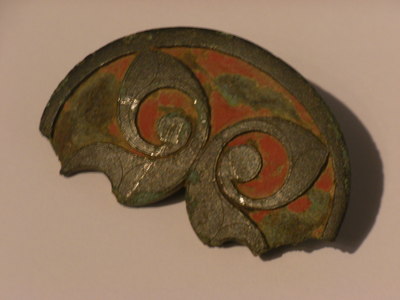 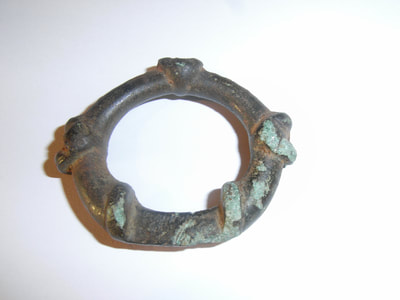 Carleton Rode Terret Ring
Two enamelled terret ring's were discovered by a metal detectorist  in 2008.
They have since been declared Treasure Trove have been purchased by the Norwich Castle Museum.
'Terret' rings are metal loops that were once fitted on to chariots to help guide the reins from the horses to the driver. They helped prevent the reins from different horses from getting tangled, making it easier to control. Because it was expensive to feed and maintain the horses needed to pull a chariot, these vehicles belonged to wealthy members of Iron Age society. The fittings used on chariots, like terrets, were often decorated with enamel, and this example is particularly colourful being decorated with 'platforms' containing enamelled flowers.
Remarkably, this terret is identical to another found in a hoard at Saham Toney in 1838, which was donated to Norwich Castle by the Rev W Grigson. The obvious conclusion is that the two terrets, found 150 years and 14 miles apart, were made by the same person. 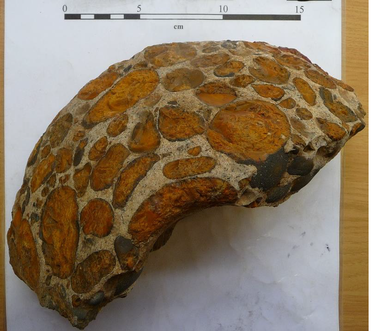 The star find from the 2011 Access to Archaeology HEFA dig, a large fragment of pudding stone quern found in a test pit dug by History Group members on a site near the Fen